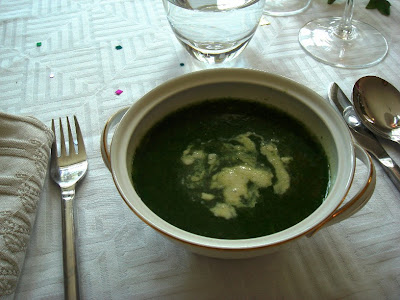 Soup this good shouldn’t be this easy, but it is! And of course it's also brilliant for a vegan, egg-free, dairy-free or gluten-free wedding. The wasabi foam adds an impressive final touch.

Wash the watercress and remove the leaves. Heat roughly half the stock in a pan with the watercress – after about 10 minutes and when it is simmering, remove from the heat and allow to cool for about 10 minutes. Take a stick blender (or pour into a liquidiser/food processor) and blend the mixture until all the watercress has been chopped into fine pieces and you have a deliciously dark liquid. Pour back into the pan with the remaining stock and heat until nearly boiling. Season to taste with salt.
For the wasabi foam, place the oil and cornflour in a heavy bottomed pan and stir together while heating gently. Gradually whisk in the soya milk. Keep whisking until the mixture begins to boil, and then add the wasabi powder. You should end up with a spicy, foamy, creamy mixture, which should then be drizzled into the centre of each bowl of soup to serve.
Dairy-free egg-free Gluten-free Recipes Starters vegan 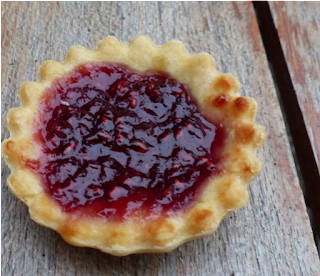 This recipe uses a lovely sweet almond pastry that is super simple to make and tastes great. You might also like to use it as a base for some other occasions where a vegan or dairy-free, egg-free or gluten-free pastry base is needed (and hey, given that it's Christmas, maybe some home made mince pies!) Makes 12 12tbsp raspberry jam (or other jam of your choice) 50g dairy-free sunflower margarine 25g sugar 75g ground almonds 25g rice flour 50g cornflour pinch salt vegetable oil for oiling the tin Oven at 160C. Mix all the ingredients together (except for the jam) and knead to form a pastry. Don't worry if it seems a bit sticky. Divide the pastry into 12 equal sized portions. Oil a fairy cake/tart tin.  Using your thumb, press a portion of pastry into each hole in the tin. Add one tablespoonful of jam to each tart and then bake for 25-30 minutes until the pastry is slightly browned. Allow to cool before extracting each tart using a palette kni