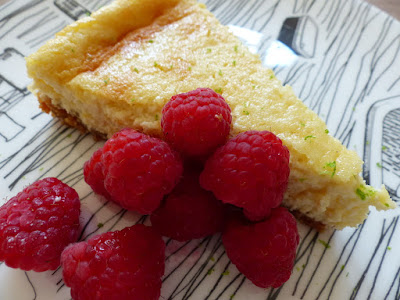 The older I get, the more I am trying not to waste anything, so when I discovered I could make cottage cheese from soured milk, I was quite excited. Even more so when I realised the cottage cheese made the perfect beginnings of a baked cheesecake.

We rarely have milk go off in our house, but the other day it did happen because I accidentally left a couple of pints in the fridge and went away for 5 days. The milk was definitely a bit off by the time we came home, so I heated it to just below boiling then added in about 2tbsp cider vinegar. It curdled, then I strained it through a piece of muslin, rinsed it a few times and ended up with this rather grainy stuff (pictured below). Its ricotta-like consistency made me think it would work beautifully in a baked cheesecake, and as I had some raspberries and limes lying around I reconfigured a recipe from my book, Gloriously Gluten Free, to make it. I was very happy with the outcome, particularly as it had a glow of virtuous non-wastage about it! 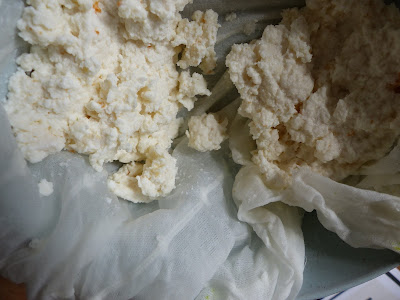 Preheat the oven to 200C. First make the base: bash the biscuits into crumbs by placing in a sealed plastic food bag and hitting them with a rolling pin (or blitz them in a food processor). Melt the butter and stir into the crumb mixture with the ground ginger. Tip everything into a 20cm (8”) deep loose-bottomed flan tin or springform tin and use the back of a metal tablespoon to compact the crumbs.
Now make the filling. Melt the butter and tip into a large bowl. Tip in the cream cheese and stir until you have a lump-free mixture. Gradually add the cream, followed by the icing sugar and salt. Separate the eggs. Stir the yolks into the cream cheese mixture; whisk the egg whites until they form firm peaks and fold into the cheese mixture. Stir in the lime zest, then pour the mixture onto the base.
Bake in the oven for 10 minutes, then turn the heat down to 160C and cook for a further 35 minutes until an inserted skewer comes out clean and it has risen and browned all over. Remove from the oven. The filling will sink as it cools, but this is normal. You can either eat the cheesecake warm or chill it before serving.
Serve with a little extra grated lime zest and fresh raspberries.