Looking for the best gluten-free sponge 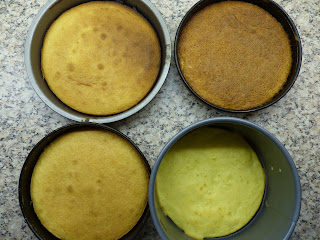 With so many gluten-free flour blends on the market, it can be really tricky to know which performs best. I have done a lot of gluten-free cookery and I think the things to bear in mind are a) whether you want your finished result to taste like the regular wheat-based version, b) whether you are happy eating lots of additives and c) how important the fibre content is.
Pure brown rice flour has a fibre content of about 2% and has a rather distinct flavour that can be noticeable in delicately-flavoured cakes. Some gluten-free flour blends are lower in fibre because they contain pure starches, like tapioca, potato or corn. They may also contain additives, sugar and milk powder. On the plus side, they tend to taste more neutral and are a better choice for a Victoria sponge, as I have discovered while trying to create my own.
However, with gluten-free foods moving more and more towards convenience, there are now lots of mixes dedicated to cake-baking, as well as others that offer high fibre. The question is, which would perform best as a basic sponge? I chose six popular products and made a classic Victoria sponge with each. If a recipe for sponge was given on the pack, I used it because I figured the manufacturer knew how to get the best from its product (Juvela, Isabel’s and Mrs Crimble’s). If not, I used Delia Smith’s classic Victoria sponge recipe and replaced the wheat flour for gluten-free.
My testing crowd (all able to eat wheat, and therefore well placed to compare with a standard Victoria sponge) were told to judge by tastiness, appearance and lack of crumbliness. I know how difficult it is to make a tasty sponge – in my book, Gloriously Gluten Free, I ended up using a pre-cooking method to prevent crumbliness without the need for gums and used some ground almonds give it that can’t-resist-another-slice moreishness. 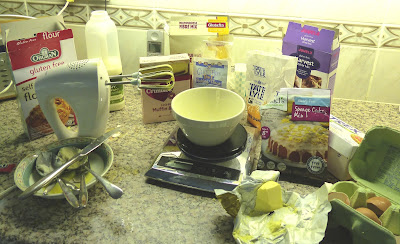 The six contestants were:


My cakes were baked, filled with jam and served to my testers. There was quite a variation in appearance (eg see four of the cakes, above), with most looking as you’d expect although Mrs Crimble’s gave a very yellow cake and Glutafin was more brown in colour. Texture-wise, five were light, moist and springy and Isabel’s in particular was very bouncy. Unfortunately Glutafin’s Fibre mix did not perform well and turned to crumbs at the slightest touch, no doubt because it did not contain any added gums so scored very badly for this reason (interestingly, neither did Isabel’s, but it is a very starchy mix and the recipe used more eggs than a standard sponge, so this may be why that cake worked well).
The flavour varied from cake to cake. While most were good, or just OK, in some cases we felt it would actually be difficult to eat a whole slice. The mouthfeel and textures also varied somewhat.
There were two stand-out performers: In second place was Juvela’s Gluten-free Harvest White Mix, which had a delicate flavour, and a bouncy and well-risen texture, placed in first or second place by five reviewers.
The obvious winner was Bob’s Red Mill Gluten-free 1-to-1 Baking Flour – five out of six reviewers placed it first. It was golden, looked the part, had a good level of fibre and produced a tasty all-round sponge that resulted in one reviewer saying she “wouldn’t complain if it was served to me in a cake shop”. Well done Bob!

NEXT TIME: I compare this lot while making muffins!
Email Post
Labels: Cakes Off the shelf Other