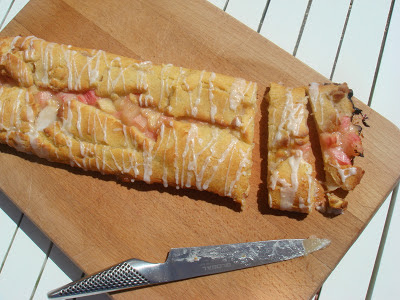 I am lucky to have inherited a rhubarb forcer, a sort of enormous terracotta pot with a lid. Basically it is placed on top of a rhubarb plant when it first starts to shoot and provides an early and particularly tender crop. The lack of light also changes the coloration of the stalks and leaves so when I removed the forcer yesterday the sight of the practically neon pink stems made me dead keen to do something interesting. 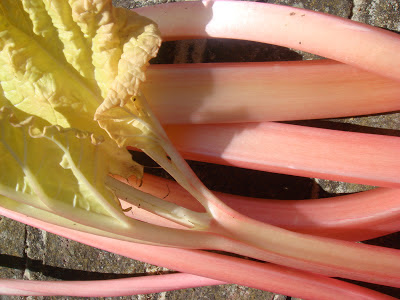 It so happens that a few months ago, I came across a classic Danish baking book of my mother’s on her bookshelf: Vi Bager (we bake). In it are several recipes just ripe for adaptation and with this in mind I created what would probably be termed a rabarbersnitte, but I’ll call a Rhubarb Danish. Of course, you don’t have to used forced rhubarb and it’d work well with stewed apple instead. It makes an absolutely delicious slice, but make sure you eat it the same day.


Extra gluten-free flour for rolling out


Oven at 200C. Peel and dice the potato, then cook for a good 15-20 minutes until really soft. Drain and mash. Allow to cool, then stir in the margarine, oil and apple/syrup. Stir in the flour, finally kneading the mix to form a dough. Place in the fridge for 20 minutes to cool.


Wipe the rhubarb clean and slice into roughly 1cm slices. Cook in a pan on a medium heat with a teaspoon of the water and the caster sugar until the pieces are soft, but still keeping their shape. Remove from the heat.


Lightly dust a large baking tray with flour and place the chilled dough on it. Using your fingers and/or a rolling pin, flatten the dough until it covers the whole tray. Place the cooked rhubarb in a strip about 10cm wide lengthwise down the centre of the dough. Now fold either side of bare dough into the centre of the rhubarb strip (don’t worry if the dough breaks up a bit as you do this, just make good as best you can). You will now have a long strip-shaped pastry. Bake for 20-25 minutes until golden.


When it comes out of the oven, mix together the icing sugar with a teaspoon of water and drizzle the icing in zigzags across the pastry. Slice the pastry widthways into 12 strips and serve.